As a brand owner, you’re always looking for innovative ways to improve business results but face the challenge of effectively managing the associated risk.

You know “playing it safe” is not the answer because it stifles real innovation. Truth is, to accurately forecast business impact of your innovative marketing ideas, you need actionable, predictive data.

WHAT THEY SAY vs DO

Just “listening to customers” is not enough because the correlation between [what people say] and [what they do] is weak because they tap into two different parts of the brain (System 1 vs System 2).

Given that the majority of purchase decisions are made @ the POP, your brand’s visibility in-store has direct impact sales because a brand not seen is a brand not bought! Also, as a “silent salesman”, pack design & communication materially impact purchase conversion at the shelf.

Question is, do you have actionable shopper behavior data to optimize brand performance? 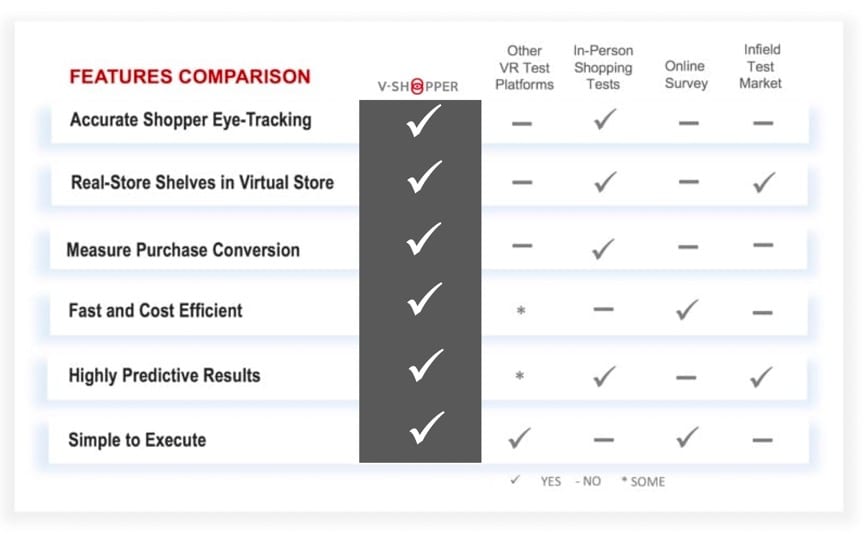 Measure your packaging in-store presence and purchase conversion at the moment-of-truth and benchmark performance against design alternatives & competitors. Gain insight on how specific package designs elements are impacting purchasing behavior. 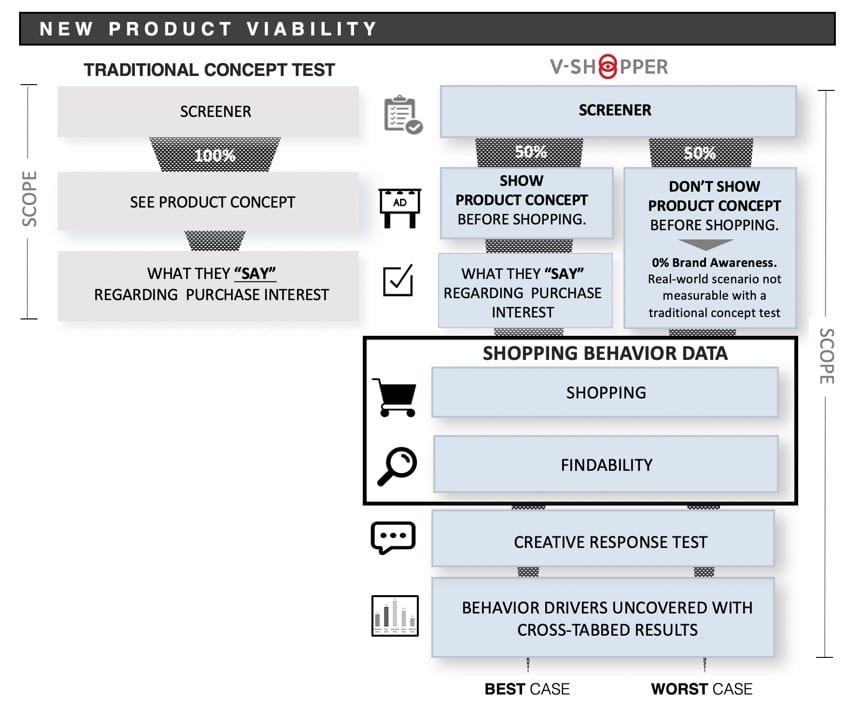 Go well beyond the scope of a traditional new product concept test so you can much more accurately forecast new product trial rate and sales potential. This higher level of accuracy traces to measuring actual shopping behavioral vs just listening to what consumers have to say.

Build a solid financial model for your new product with best and worst case scenario data.

Directly measure the impact your ad concepts have on shopper behavior and uncover the creative elements that have the biggest impact on purchase desire.

Only online research platform that can accurately track shopper eye movement within a virtual store...

Shopper facts have a confirmed .85 correlation vs in-market results. Enables you to make fact-based marketing decisions.

Shoppers are asked to find a specific SKU on-shelf using the V-Shopper's ocular lens after they have finished shopping.

How findable is your brand? How findability is measured & why it matters >>

Directly measure the effectiveness of advertising and design. Ensure that communication priorities are coming through and are focused on what is most important to your target audience. Also, uncover the strongest brand visual equities of your creative and how well these creative elements support your desired brand perception. Importantly, take all of this creative insight and correlate it with impact on purchase desire so know based upon behavior, which creative elements are the most powerful business drivers.

Why did a pack redesign lead to a decline in brand share of market?

Results showed a very strong .85 correlation between purchase behaviour data generated through V-SHOPPER and in-store shop-alongs. Further, researchers concluded that V-SHOPPER’s Ocular Lens was able to demonstrate expected results in most cases versus what was expected based upon normative shopper attention data. Conclusion from the study was that V-SHOPPER is able to provide managers with a more cost and time efficient methodology to examine the actual impact of marketing actions intended to capture shopper’s attention at the retail shelf and to influence behaviour.